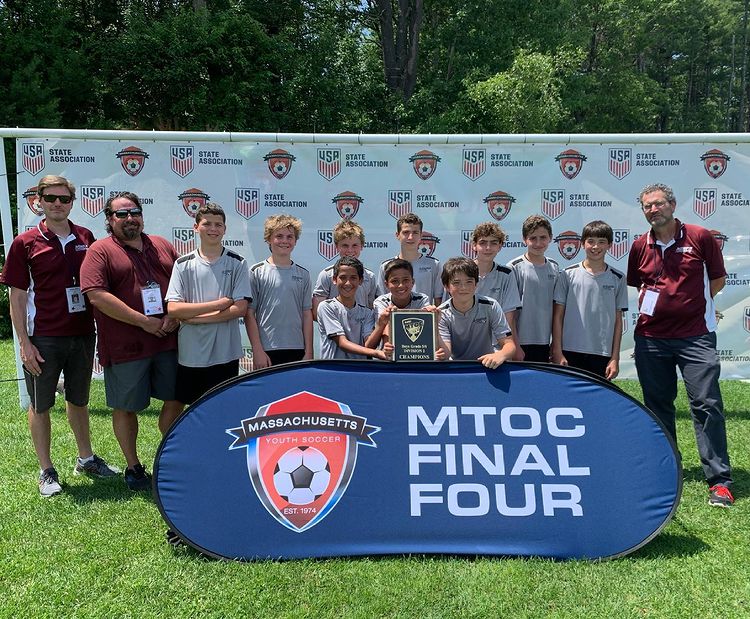 The ASC B6 Lightning, representing the Arlington Soccer Club (ASC) and Boston Area Youth Soccer League (BAYS), topped off a spectacular 8-0 post-season run by going undefeated in group play over two days and then wining their semi-final and finals on Sunday in convincing fashion to be crowned 2021 Massachusetts Tournament of Champions (MTOC) for Boys Grade 6 Division 2.

The Lightning, who finished their regular season 9-1-0 in BAYS Grade 6 D2B, advanced to MTOC after winning the BAYS Grade 6 D2 Championship with a 5-0 over Natick in the quarterfinals, and then defeating D2A runner-up Holliston 3-2 (?) in the semi-finals and D2A Champion Southboro 5-0 in the BAYS Final.

In group play at MTOC the Lightning scored 12 goals while keeping three clean sheets in a sweep over town-league champions Southwick, Marshfield and Acushnet, advanced the to the semi-finals where they notched a 6-2 victory over Andover, and then triumphed 4-0 over Worcester in the MTOC Finals.

The Lightning did the ASC and BAYS proud throughout with both their sportsmanship as well their entertaining and often beautiful quality of play.

Congratulations to the ASC B6 Lightning. Well-done boys!